You are here: Home / Robert Long / A Case of Desensitisation – What Would You Do?

Believe it or not one of the most popular search terms on this site is “gory safety videos”!!! But do shock and horror war stories really encourage safe behaviour or is it just voyeurism that creates the interest?. You will really enjoy this latest article by Dr Robert Long. If you liked this article then you should read the whole series: CLICK HERE. I highly recommend you check out Rob’s new book “RISK MAKES SENSE”

If you really want to see gory accident photos and videos then follow this link: www.safetyrisk.net/gory-work-accident-photos-and-videos/

A Case of Desensitisation – What Would You Do? 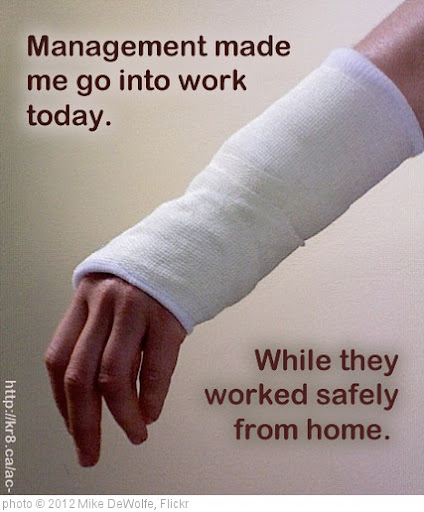 There is no doubt that fear is attractive, not to experience first hand, but to observe voyeuristically. The popularity of the TV show Fear Factor is evidence of this. There is also a popular trend in the safety industry of parading before people the stories of others who have suffered in an accident. It seems a bizarre methodology that believes that ‘war stories’ are of themselves an effective instructional tool. One of my associates David Holland certainly fits into the category of safety war stories, which is why he and I are most concerned with not using David’s story for entertainment. The evidence shows that the shock and horror of stories like David’s have little lasting effect without follow up skill development or supplemental learning.

As much as can be experienced in moments of ‘shock and horror’, they rarely result in substantial transformation. Similarly, Safety Days (which may be highly entertaining) without proper supported skill development are about as effective in learning as a McHappy Day. People are easily desensitized to shock and horror and soon distance is created in the mind of the listener so that they endorse the belief, ‘I’m not stupid, this cant happen to me’. For example, much research has been undertaken on the effectiveness of ‘boot camp’ approaches to learning only to show that such a model of training has little lasting effect. Most learning is only effective when it is longitudinal and relational. But I digress, let’s return to the topic of fear.

We can learn something from this voyeuristic interest in fear, particularly with regard to how people become desensitized to it. Desensitization is simply the diminishing of emotional response to something. An understanding of the psychology of desensitization and automaticity is a most helpful start for safety leaders in learning how to manage and recognise complacency. The number one cause of fatalities in industry is not failures in technology, legislation or systems, it’s complacency. This is not a statement about personal blame rather, a statement of reality of what it is to be human.

It doesn’t matter whether it’s about marriage, friendships, a new car or a memorable journey, we eventually ‘take for granted’ our experiences as a nature of human psychology. Now, it’s important to realize that desensitization is not neutral, it’s neither always bad or good. Indeed, techniques of desensitization are often used to help people overcome irrational fears or addictions. Repeated exposure is a technique for helping people and animals overcome all nature of fears eg. this is how they work with horses to accept the fear of getting into a racing barrier and even then we see many horses struggle with that experience.

We can also learn much from the study of phobias in themselves, that is, the mis-attribution of fear to a risk. Both swings of the emotional pendulum (phobia and desensitization) need to be understood if we want to influence the attribution of risk in the workplace.

The more we understand the process of desensitization, the better we can prepare for, and intervene in, the mechanisms that support complacency. This is where skill development in observations is so important. We need to be skilled in recognising when humans function on automatic and when their senses have been desensitized to risk. We can’t do this unless we become adept at observing and speaking in ‘workspace’, ‘headspace’ and ‘groupspace’.

We need to know what kind of environment, culture and climate are most conducive to desensitization and complacency. This is partially what Weick means when he speaks about ‘managing the unexpected’. We can’t do this without some skill development in observation and conversation. No system or checklist is going to help detect climate, environment or culture, cultural assessment is very much a human observation task.

I was talking with someone last week that works in an abusive bullying workplace, and they didn’t know it. Apparently, it was acceptable for the Ted (pseudonym) to walking in to the office, scream abuse at the top of his voice, smash and throw things and for everyone in the organisation to accept this as normal. Various excuses were made to laugh this off as: ‘it’s just how Ted is’, Ted calms down after a while’, ‘Ted doesn’t mean it’ or ‘Ted’s under huge stress’. Whatever the spin does not matter, Ted’s behaviour is abusive and exerts significant distress in the workplace. People in this workplace ‘walk on egg shells’, they tip toe about Ted for fear he will ‘explode’. It was only when I articulated the problem that some began to see what they had become desensitized to. Most feared of their jobs, made no comment and in so doing normalized the desensitization process.

Another friend was working for a civil construction company as a Safety Manager and this week had to resign because Bill would not follow a safety directive. Plant had been tagged out Bill (with similar violent antics as Ted) refused to comply with procedure and chose to hop in the machine and operate it. When confronted his reply was: ‘I’m the boss, I can do what I like’. If something were to happen I’m not sure the Nuremberg excuse (I was just following orders) would stand in a court. Bill continued on using the plant for several days and in the end, the choice to remain silent on such issues results in condoning the behaviour. There is no neutrality in risk.